Hello!  I am sure I have been sorely missed, it has been too long since I last updated this blog with a new recipe.  Funny, since I now have a huge backlog that I want to get up!  I will be posting several new ones today.  The thing is, I live in ND.  In ND we just DO NOT get enough really nice and hot weather, so I feel like I need to enjoy all the hot weather activities while I can, like taking the kids to the pool and NOT shivering the entire time.  This weekend we went tubing which was so much fun!  I couldn't believe it that my 7 year old loved it as much as he did!
If you need a meaty, hearty sandwich, give this a try.  I just love these puppies.  Last time I made them though, I went a bit heavy on the hot sauce (which I love) and as a result my 2 younger kids wouldn't eat them.  Heavy means that I probably put in a good 2 Tbsp;)  Also, be advised that I cut the butter in this recipe in half.  If you want to go with the PW original, just double the butter each time you put it in.  I find it is delicious with just a stick, and my arteries thank me. 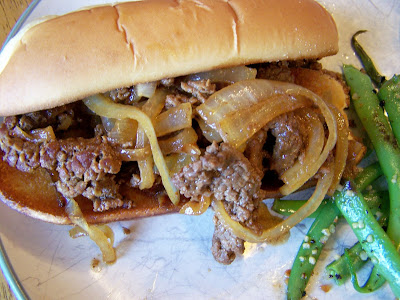 Marlboro Man's Favorite Sandwich
1 whole large (or 2 small) onions
1 stick butter
2-3 lbs. cube steak (tenderized round steak that's been extra tenderized)
Seasoned Salt
1/2 c. Worcestershire sauce
Tabasco Sauce, to taste
4 whole French/deli rolls (like Earthgrains)
Slice the onions & cook in 1 Tbsp. butter until soft and light brown.  Remove and set aside.
Slice cube steak against the grain.  Season with seasoned salt.
Heat 1 Tbsp. butter over high heat (in same skillet) until melted and beginning to brown.  Add meat in single layer.  Cook one side until brown, then flip and cook until brown, about a minute on both sides.
Add 1/2 c. (at least) Worcestershire sauce, 5-6 shakes Tabasco, and 1 Tbsp. butter.  Add cooked onions.  Stir to combine.
Butter halved French rolls and brown in skillet or under broiler in oven.
To assemble, lay bottom half of French roll on plate.  Place meat mixture, followed by a spoonful of juice from the pan.  Top with the other half of roll, cut in half, and devour!
Source: Thank you PW for another winner!
Posted by Megan at 8:45 AM