Today while I was making lunch, I received a call from the school nurse wondering if I wanted to take my child in to the doctor.  My middle son, Quinn whacked his head on the playground equipment and was bleeding pretty profusely.  By the time the nurse called me, she had gotten it to stop bleeding.  She said that it was gaping just a bit and was about an inch long.  I asked if he had a headache and if he was OK.  She asked him and he said he felt fine.  I asked where it was (for scarring reasons) and she said that it was covered by his hair up high on his forehead.  So...I told her to put a band-aid on it and call it a day, basically.  I kinda felt like a bad mom for not coming to check it out or anything after I got off the phone.  I know a few years ago I certainly would have.  The fact is, Q is an accident prone child and we have been down this road...MANY times.  So...am I a neglectful mother?  Would you have ran to the school and (possibly) taken your child in?

Anyway, this pasta is SO GOOD!  I got the recipe off of Tasty Kitchen.  I will be making it again because even all 3 of my kids really liked it! 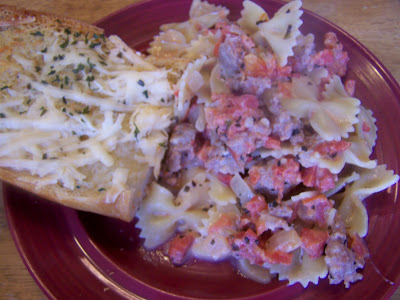