Boy, I am really getting behind.  No post yesterday because somebody put a virus on my computer that my husband had to spend last night repairing.  I don't even want to talk about the virus (picked up from a pop-up when a certain person was facebooking), it flooded the screen with tons of not so flattering images of consenting adults.  YUCK.  I had to threaten the kids with no computer usage for 1 month to make sure they didn't turn the screen back on and forever scar themselves.  Although, since all I, I mean, somebody was doing was facebooking when they picked up the nasty s-e-x virus, I am a little afraid that my 10 year old could innocently do the same.  Ugh.

Enough about raunchiness, on to food!  (Nice transition, no?)

I really loved the Pioneer Woman's Pot Roast recipe that I made last week.  I have tried many, many pot roast recipes, and this was (big surprise, SHE ROCKS!) a favorite of mine.  Be sure to serve it with some mashed potatoes too though, since it doesn't include any.  I suppose you could throw some in the pot, but I agree with PW that mashed potatoes are just better all around.  If your short on time though, I would just throw 'em on in with the other veggies.

Here is why I think hers is so darn good (knowledge gleaned from some good, bad, and mediocre pot roast experiences)
*She sears the meat: non-seared meat= DRY pot roast
*She sears the veggies: this was a new concept to me!  I really think it improved the flavor though
*DEGLAZING!!!  Need I say more?
*WINE!!!!!  Nuf said.  Plus, I got to finish the bottle.
*Last, but not least, I really think a pot roast tastes better when oven-roasted.  I LOVE my crockpot, but I really isn't the same even though I wish it was not so. 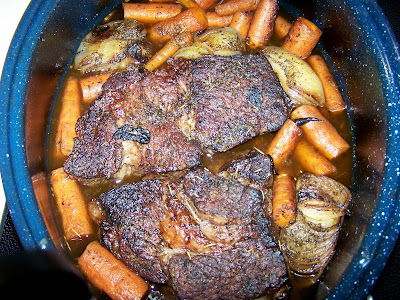 PW's Pot Roast
2 Tbsp. olive oil
4-5 lb. chuck roast
2 whole onions
6-8 carrots
salt, to taste
pepper, to taste
1 c. red wine (you can use beef broth instead- I think wine gives better flavor though)
2-3 c. beef stock
3 sprigs fresh Thyme (I forgot to buy both this and the rosemary, so I just used about 1 Tbsp dried Italian seasoning and it tasted great)
3 sprigs fresh Rosemary
First and foremost, choose a nicely marbled piece of meat.  This will enhance the flavor of your pot roast like nothing else.  Generously salt and pepper your pot roast.
Heat a large pot or Dutch Oven over med-high heat.  Add 2-3 Tbsp. of olive oil.
Cut 2 onions in half and cut 6-8 carrots into 2 inch slices (you can peel them, but you don't need to).  When the oil in the pot is very hot (but not smoking), add in the halved onions, browning them on one side, then the other.  Remove the onions to a plate.  Throw the carrots into the same, very hot pan and toss them around a bit until lightly browned, a minute or so.  Remove carrots to plate.
If needed, add a bit more olive oil to the very hot pan.  Place the meat in the pan and sear on all sides until it is nice and brown all over.  Remove the roast to a plate.  With the burner still on high, use 1 c. of red wine or beef broth to deglaze the pan, scraping the bottom with a whisk to get all of the wonderful flavor up.  When the bottom of the pan is sufficiently deglazed, place the roast back into the pan and add enough beef stock to cover the meat halfway (about 2-3 cups).  Add in the onion and the carrots as well as the thyme and rosemary.
Put the lid on, then roast in 275* oven for 3 hours (for a 3 lb. roast) or 4 hours (for a 4-5 lb. roast).
When serving, the juices make a wonderful gravy for the meat, veggies, and mashed potatoes.
Source: Pioneer Woman
Posted by Megan at 1:29 PM