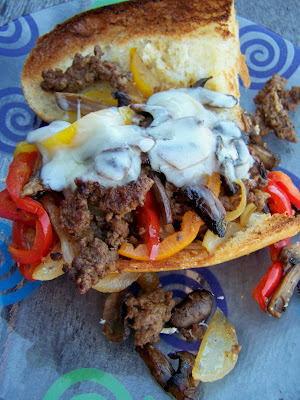 Yesterday, my oldest child turned 12.  Mentally, that is such a milestone for him in my mind.  It is where he begins the transition from child to teenager.  That is so incredible to me.  It seems like he was so little just yesterday!  I am proud of the handsome, smart, kind man that he is becoming but I wish I could hold on to the child in him just a little longer.
I made these sandwiches about a month ago and I posted pictures on facebook to tease everyone with their deliciousness.  I then promptly forgot to post them.  What a tragedy!  Thank goodness I came across the picture in my files!  I love the Pioneer Woman's original Marlboro Man's Favorite Sandwich but I think that this one is much better yet.  I cannot wait to make it again! 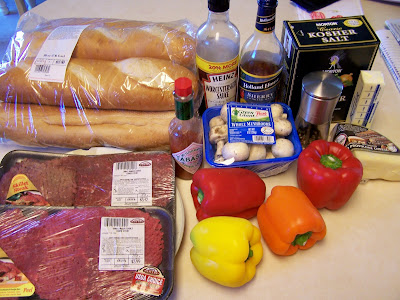 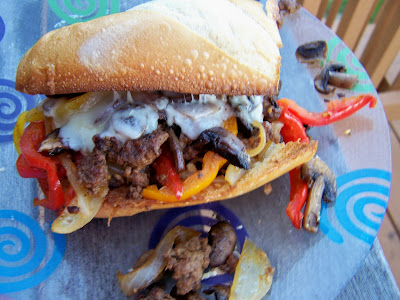 The Marlboro Man Sandwich- Pioneer Woman Style
4 Tablespoons Butter
2 pounds Cube Steak (round Steak That's Been Extra Tenderized)
Kosher Salt
Freshly Ground Pepper
1 whole Large Yellow Onion, Halved And Sliced Thick
2 whole Green Bell Peppers, Sliced Into Rings
2 whole Red Bell Peppers, Sliced Into Rings
3 cloves Garlic, Minced
16 ounces, weight White Mushrooms, Sliced
2 Tablespoons (additional) Butter
1-1/2 cup Sherry (regular Or Cooking Sherry Is Fine)
4 Tablespoons Worcestershire Sauce
4 dashes Tabasco (more To Taste)
8 whole Deli Rolls (the Crustier The Better)
2 Tablespoons (additional) Butter
8 slices Cheese (Provolone, Swiss, Pepper Jack)
Preparation Instructions
Cut cube steak into strips against the grain. Season with salt and pepper. Set aside.
Heat 4 tablespoons butter in a large skillet over high heat. As soon as it's melted (but before it burns) brown strips of cube steak in two or three batches, about 1 1/2 minutes per side. Remove meat to a clean plate when brown. Set aside.
Reduce heat to medium-high. Add onions, garlic, green peppers, and red peppers and cook for 3 to 5 minutes, or until relatively soft (but not flimsy.) Remove to a clean plate. Set aside.
Melt 2 add'l tablespoons butter to the skillet. Add sliced mushrooms and stir. Pour in sherry, then add Worcestershire and Tabasco. Cook over medium-high heat for five minutes, or until liquid has reduced by about a third.
Add in meat and vegetables, stirring to combine. Cook for just a few minutes to heat everything up, adding more sherry and Worcestershire (and Tabasco) as needed. Stir in 2 tablespoons butter at the end. Keep hot.
Toast halved deli rolls in plenty of butter until golden brown and crisp. Spoon meat/veggie mixture on the lower half of the bun, then spoon one or two tablespoons of pan sauce over the meat (it will soak into the bun.) Drizzle a little sauce on the underside of the top bun, too, for extra flavor and moisture. Top with cheese and broil for a minute or two, until the cheese is melted.
Serve immediately.

Source: The Pioneer Woman
Posted by Megan at 7:49 AM