We made a big pot of our favorite soup, Zuppa Toscana over the weekend. It was perfect meal for a weekend filled with Winter Storm Warnings:-) I have posted this recipe before on my other blog, but I am going to work at getting all the recipes off of there slowly posted here.

I'm not sure how you can go wrong with flavors like this together. Keep in mind, this makes a full, HUGE pot of soup. I don't recommend halfing it though, you will want the leftovers--plus it just gets better as it sits in the fridge and the flavors have a chance to meld. 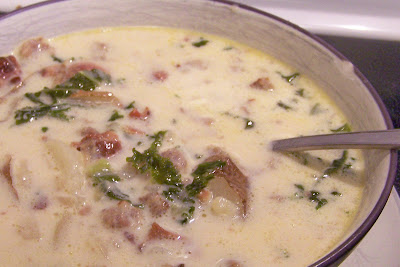 Pour the chicken broth into the Dutch oven with the onion mixture; bring to a boil over high heat. Add the potatoes, and boil until fork tender, about 20 minutes. Reduce the heat to medium and stir in the heavy cream, cooked sausage, bacon, and kale; heat through.
I HIGHLY recommend that you serve this soup with Crusty French Bread, warm from the oven. It is so good to sop up this soup with.
Posted by Megan at 7:50 AM