Last night, I was watching a documentary on PBS about the Germans from Russia that are so common in North Dakota.  It was a very interesting program, especially so for me because my grandparents on my dad's side are part of that culture.  Recently, I have heard my grandpa talk more and more about what it was like to be a youngster in a very large, poor farming family in Western ND.  My grandpa could have been one of those interviewed, his story was so like others that went through the same hard times.  I think he would really enjoy the program, I believe it was called Of Earth and Sky.  One interesting tidbit that my grandpa recently told me, was that he never actually had a birth certificate.  He was born at harvesting time and his family did not have the time to take care of it during that busy season.  It was apparently, forgotten and never did happen.  In the grand scheme of things, those times are not long behind us, but things have certainly changed dramatically.

One piece of my Germans from Russia heritage is Knoephla soup.  I grew up eating this, often with premade "knoephla dumplings" that a local company called Baker Boy makes.  We always made the recipe on the back of that package.  Recently, I started wondering how hard it would really be to do it entirely from scratch.  I came up with this recipe and I am really happy with it.  I also like the fact that it contains much less than the entire stick of butter the Baker Boy recipe calls for. 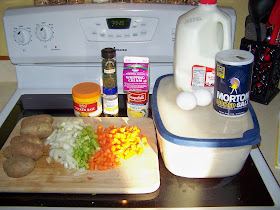 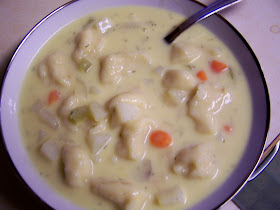 Knoephla Soup
2 Tbsp. butter
2-3 carrots, diced
2 ribs celery, diced
1 small onion, diced
2 Tbsp. chicken base
2 Qts. water
3-4 potatoes, peeled & diced
3-4 bay leaves
1/2 tsp. dill weed, optional
1/2 tsp black pepper (or to taste), optional
1 can cream of chicken soup
1 c. cream
Dough:
2 c. flour
2 eggs
1 tsp. salt
1/2 c. milk
Melt butter over medium-high heat in a large stockpot.  Add carrots, celery, and onion.  Saute until the vegetables are crisp tender and onion is beginning to turn translucent.
Add 2 Qts. water, chicken base, potatoes, bay leaves, dill weed, and pepper.  Bring to a boil, reduce heat, and simmer for 10-15 minutes until the potatoes are tender.
Meanwhile, combine dough ingredients and knead until smooth and elastic.  I like to throw mine in my kitchen aide mixer and let the bread hook attachment do the work for me:)  Lightly flour your counter and gently roll out dough into a "rope" (approximately 1" in diameter).  Use a pizza cutter or knife to slice the dough in 1" increments.  As you slice, add the cut dumplings to the soup.  Let simmer for 5 more minutes.
Combine cream of chicken soup and cream with a whisk.  Add to soup.  Let simmer for 2 more minutes.
Enjoy!
Megan at 10:35 AM